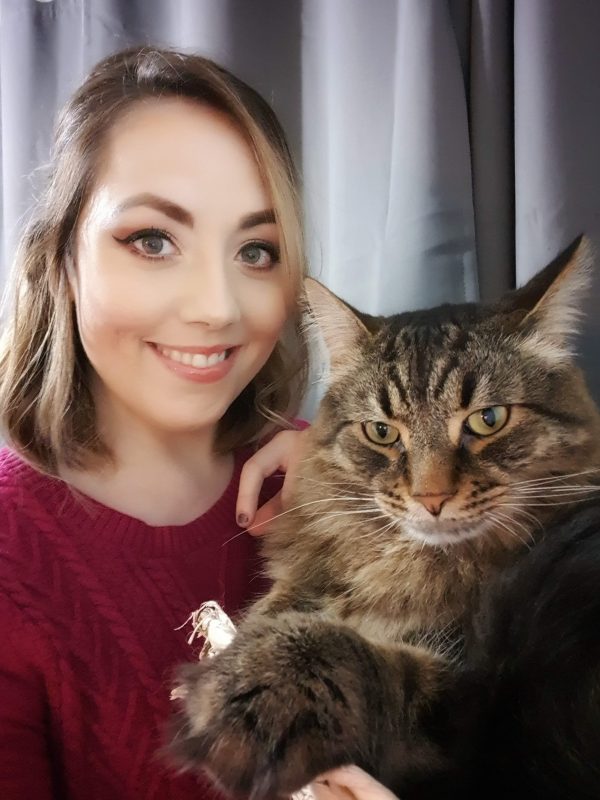 In this series of mini interviews, we are going to put the spotlight on some inspirational women to celebrate International Women’s Day 2021.

Today we are chatting with Holly Brockwell, technology journalist and owner of a very special cat shelter – “Holly’s Manky Moggies”

Hi Holly, how are you today?

Tired but wired! It’s been a pretty hectic day in terms of cat drama, but it’s all absolutely worth it. They bring me so much joy! One is trying to attack my computer mouse right now.

So tell us, how did Holly’s Home For Manky Moggies start?

You know how you have those vague lists of life goals that never actually happen? Well, alongside “try out being a nun for a bit,” I had “start my own cat shelter.” I’d given up on the nun thing some years back due to an unfortunate lack of faith in the Beyond, but the cat shelter one was always there. It got much stronger after I adopted an elderly cat called Furious Maud who I had to nurse through treatment for aggressive cancer. It was a tough, expensive 10 months but some of the most rewarding of my life, and when she passed, I knew I wanted to help more cats like her.

Last year, mid-pandemic, my flatmate had just moved out, and his replacement backed out at the very last second for a ridiculous reason. In my fury and resignation, I thought “OK, how can I make this a good thing?” and turning the second bedroom into the cat shelter of my dreams was the answer. Was it the right time? Probably not. Could I afford it? Not without some major sacrifices (I will probably never own a house, ha ha). But I had an amazing cat-friendly landlady who was totally on board (love you, Jessica!) and a crowd of incredible internet friends who’d loved Maud and helped fund her treatment, so I thought “sod it” – and the shelter was born.

Did you grow up around cats?

Oh yes. One of the recurring themes in photos of me and my various forebears is that we’re often found near or holding a cat. It’s just not a home without one, you know?

How did you choose the name for Holly’s Home For Manky Moggies?

As usual when I’m trying to figure something out, I asked Twitter, and kicked various ideas around with friends. The eventual name isn’t particularly clever or punny (unlike a lot of my first ideas), but it makes me smile.

That said, it has had some negative feedback. A few people have pointed out that the Google definition for “manky” makes it sound pretty crappy – which is annoying, because I’ve always used it in a very affectionate way, it’s a word that’s always made me smile. Also, one lady got in touch to say she doesn’t think it’s right to suggest that the disabled cats I’ve adopted are “manky,” which I understand, but it’s not just a home for disabled cats – it’s more a comment on how they are when they arrive. Which, in the case of my movement-impaired kitten Smol Paul, for instance, was dirty, smelly and riddled with fleas. Definitely manky!

I still might rebrand at some point if it upsets people, though. I’m from Nottingham, so I thought maybe Holly and Her Merry Moggies, ha ha.

What’s been one of the biggest challenges facing you?

Funding the whole thing. Patreon subscriptions cover the rent for the cat room (and since this is London, that’s a whopping £1k a month – but there are more cats in need here than elsewhere because of the rampant rental market and anti-pet landlords), but everything else is pretty much on me. Insurance, vet bills, food (including various types of specialist vet food), toys, beds, cat trees (they have more furniture than me!), and all the stuff you don’t even think about, like the cost of running the dishwasher every day, plus the many, many hours of my time it takes away from work.

I’ve been incredibly lucky to have received donations from people who know me through social media – not just financial support but practical things like pee pads, food, and toys their own cats didn’t like! They help enormously, plus I’ve met some amazing people (at a distance: thanks covid).

So, do all the cats at your shelter have special conditions?

Not exactly – the aim is to help kitties who would be unlikely to find a home elsewhere. That can mean medical conditions, as in Smol Paul’s case – rehomed twice in his first six weeks of life because he has cerebellar hypoplasia and is thus a bit wobbly – or other “undesirable” traits like being elderly (I have three Golden Oldies: Max Cuddles, Meemoo and Duck). The senior ones do all have medical conditions too, but that often comes with age.

I had two cats of my own before the shelter started, and they’re here too: Mawri, a glossy black floof who sadly originally came from a kitten mill, and Moose, who was given up at 9 months old and was recently found to have a heart murmur. So they do kind of count as manky, actually!

How did you find the resident cats, or how did they find you?

I used to rescue birds before cats (sadly those two pastimes aren’t very compatible, what with the whole predator-prey thing!), and word that you’re the local Crazy Animal Lady gets out very quickly. That means people start coming to you with urgent cases. I also comb the pet ads regularly because people in dire circumstances sometimes post there if they don’t know what else to do or don’t have someone to help.

It doesn’t always result in an adoption – for instance, once I saw an ad from a lady who was having to rehome her service dog because her landlord changed his mind and was trying to charge a fortune for her to have a pet. I was furious and knew the laws he was breaking, so I got in touch, helped her through the legal side (with assistance from my brilliant friend Jen at AdvoCATS) and she got to keep the dog. We’re still friends now!

Do you only take on cats from London or other part of the uk as well?

I’ve had some enquiries about cats from other areas of the UK. So far the furthest afield I’ve travelled was only to St Albans for Meemoo, but if there’s a cat somewhere in the country that needs help and there isn’t someone closer, I’m totally willing to do whatever I can to get them here. So far none of the further away cats have ended up needing to come here, but I managed to hatch a plan to bring them in every case – upside of spending too much time on Twitter!

How many resident cats do you have right now? Tell us about their quirks!

Mawri: my first arrival. Taken from her mum too early, although I didn’t know that until I took her to the vet and found out she was much younger than I’d been led to believe. I’ve learnt a lot since then! My favourite quirk of hers is that she has a little pink teddy she’s had since she was a baby, and she loves to carry it around in her mouth and nuzzle on it.

Moose: a giant tabby who is somehow also a giant wuss. His first family left him behind (in a park!) and their loss is very much my gain. He’s incredible. I’m keeping an eye on his heart murmur, but he’s otherwise healthy, and has a favourite grey fleece blanket he likes to knead and suckle on while I rub his fluffy belly.

Duck: a 13-year-old tortie diva who rules over the cat room with an iron paw. When she arrived, she had a lump that we thought was mammary cancer, but she now seems to be in the clear. She does have some other medical problems, but I’m sure I will when I’m 70-ish (in human years!) too. She struggles to groom herself because of her age, so I have a groomer who comes to help her out every so often. 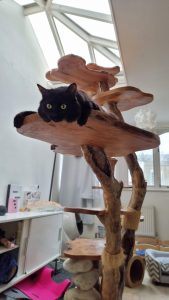 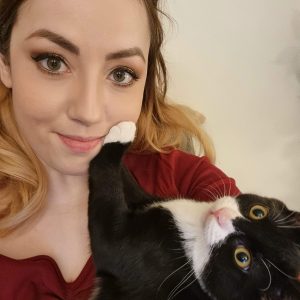 Holly and her Manky Moggies

Max Cuddles: a 10-year-old ginger tabby with a floppy ear. He has lots of allergies and his ear causes him some problems – he always touches it nervously when he’s anxious. He was really aggressive and scared when he arrived and now he’s a huge cuddle bug, hence the name. He was rehomed because one of the cats he lived with was stabbed – they survived, but dear LORD, humans! We are the worst species.

Meemoo: a beautiful torbie floof whose owner had dementia and then passed away, leaving her homeless. She has some medical issues and is a huuuuge anxiety-bod, which leads to some protest peeing when she’s been to the vet. Every time I turn the bedside lamp off, she sneaks up to my pillow and purrs like a tractor while I fuss her. My clothes are really hairy because she likes my wardrobe, so I made her a bed in there.

Smol Paul: I didn’t intend for him to be called that, but I jokingly referred to him as “small Paul” when he was still unnamed, and it stuck (“smol” is the internet spelling). It blows my mind that two families rehomed him just because he’s wobbly – he’s the most charismatic and entertaining little man I’ve ever known. I’m so in love with him, and his determination to never use any of the cat steps and cushions I bought to make his life easier.

Smorky: about two seconds after I said “OK, no more cats now,” this baby arrived. She’s about six weeks (so again, too young to be taken from her mum), and was kicked out by a landlord who changed his mind about allowing pets. It’s lucky, because she actually has a massive hernia that needs surgery – she’s just not big enough to have it yet. She’s getting on brilliantly with Paul, they could be siblings! It’s adorable.

The Greybies: grey babies! Lady and Earl’s mum died when they were only a few days old, so I took them in and started hand-feeding. It was every 2-3 hours around the clock and absolutely exhausting, so I was pretty lucky when Broken Halo – a brilliant shelter I work with – put me in touch with a foster family who had a bereaved mum cat. She adopted the Greybies as her own, and now that they’re weaned and grown, they’re heading off to an amazing new home. They’re the only ones I’ve rehomed so far – but now they’re past hand-feeding, they’re healthy (as well as being utterly gorgeous) and don’t qualify as ‘manky’ anymore. I’ll miss their fluffy little faces, though!

Sign up to our kitty mails for the latest competition, discounts and free boxes!